I have heard Lower 48 hams extol the fun of the 18 MHz band, and I must confess being a bit intrigued.  Several weeks ago I heard a brief European opening in the middle of local night, and I worked a JA at the same time.  Twenty meters was essentially lifeless, and 15m was DOA.  During the solar upset earlier in the month, I was surprised to hear VK/ZL phone transmissions on 17 meters when little could be detected elsewhere.  I decided to download Faros by VE3NEA and spend a few days monitoring the high-band beacon network sponsored by the Northern California DX Foundation.
The following 24-hour sample shows some surprising (to me) openings on 17 meters.  The vertical axis on each sub-graph represents frequency in MHz.  The horizontal axis shows time starting at 0000Z and major ticks every three hours.  The boxes represent time slots for each beacon, and colors range from dark blue to orange and red to indicate increasing signal strength.  paths are fairly weak.  (Some beacons, like 4U1UN, are off the air.)

(Almost) All Quiet on the Northern Front

This past week brought a C-class x-ray flare, and the sun sent a coronal mass ejection hurtling toward earth.  The HF prognosis for the first week of August was poor, indeed.  There would be a "solar tsunami" arriving around August 3rd, according to one local headline, while worldwide there were predictions of fantastic auroral displays.  The six-meter gang at the mid-latitudes must have been drooling with anticipation, but HF radio operators inferred a dismal time on the bands.  The HAARP riometer looked grim.  Kp was at 5 and headed upward, plus the aurora scale was pegged at 9. 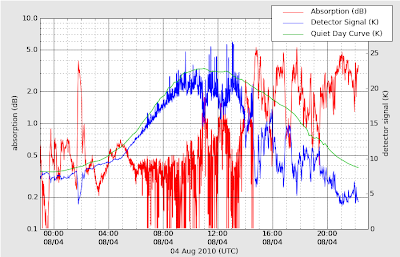 I would have written off the radio and cleaned the cameras to prepare for the northern lights had it been a week or two later.  The skies at night are still too light to see aurora at 65 North, though.  Instead, I fired up the rig to see what, if anything, I could hear during the onslaught.
I chose to explore 20m around 0200Z, and I heard W1AW with code practice almost ESP-weak.  No other CW signals were audible.  I switched to the 85-foot C3 pointed to Europe, and I noticed  a surprising number of apparently European PSK31 signals.  Although the signals were moderately strong, I could see on the waterfall an unsettling dance of flutter and Doppler.  DM780 could just make out a few prefixes and other tantalizing details.  PSK31 on trans-polar paths is notoriously susceptible to corruption.  I switched to the North American C3 and could begin to see (and decode) several US stations, but copy was still rough. With the Kp index so high, I had little hope of them being able to hear me.  Years of experience have taught me that much.
I quickly scanned the higher bands up through six meters.  I was surprised to hear some weak but readable ZL/VK SSB on 17 meters, but otherwise, they were dead.  Back on 20, I watched the digital waterfall display and saw slightly improving conditions towards the States.  Two very clean PSK signals appeared, which turned out to belong to a VK and a 3D2, both 90-95% readable.  The north-south route was less impacted by the ionospheric turbulence overhead, and I believe grayline enhancement helped things along.  (A short time later I had a nice chat with Aisea 3D2AA and proved the reasonably good path was two-way.)

The signal ID function in DM780 then reported an Olivia 500/16 signal just up the band.  I could barely discern the smeared, faint tones on the waterfall, but I tuned up and changed modes to see what I could monitor.  Lo and behold, it was Peter VE7NBQ having a ragchew with a W5.  Peter had told me of the impressive performance of Olivia earlier in the week, and now I am convinced. As the tones faded from view on my screen, characters continued to print a clean QSO. Olivia's forward error correction makes it far superior to PSK31, and perhaps even CW under some circumstances.  I will have to explore more.
Posted by KL2R at 09:23 No comments: