QRPp and a Magnetic Loop

W0MRZ had an awesome signal into KL2R this afternoon on 20m PSK31.  He said he was running 500 milliwatts and a magnetic loop antenna just delivered.

An ah-HAH moment occurred recently with respect to the FT-950 operation with a DMU-2000.  In searching for ways to better use the two, I believe I've improved the effectiveness of operation using VFO-A and -B as well a different band scope settings on the DMU.
http://www.akradio.net/DMU2000.htm 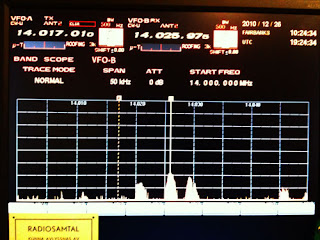 I used to get a lot more stressed over the holidays.  All the shopping, decorating, cooking, and dreaded family gatherings interfered with some fun, year-end activities on the air.  KL1BE and I agreed some time back to severely prune the commercialism, and magically there is much more time for radio!

First on the December docket was Skywarn Recognition Day.  SRD in Fairbanks serves as the primary opportunity for the Arctic ARC to activate KL7FWX at the National Weather Service Office.  Dan KL1JP has been instrumental in organizing these events for several years.  This time he focused on heavy automation with Ham Radio Deluxe, his FT857D, a Microkeyer II, and an LDG autotuner.  I helped configure the HRD and MK2.  Echolink driven primarily by Mac Carter KL2GS netted hours of contacts.  Phone, CW, and digital modes worked on HF.  In total, a 10-year best number of stations went into the log.

The ARRL 10M Contest proved a hoot, although some prime operating time was missed due to other obligations.  I haven't made so many contacts on 10 meters in ages.  Later in the month I find the RAC Contest an enjoyable hunt, and this year was more successful than most.  The few hours of Rookie Roundup was enriching, and I worked some good new ops.  December always ends on the positive note of leisurely holiday ragchewing.

So now the look is ahead to the on-air events in the coming several months.  Push onward and upward!
Posted by KL2R at 09:38 No comments: 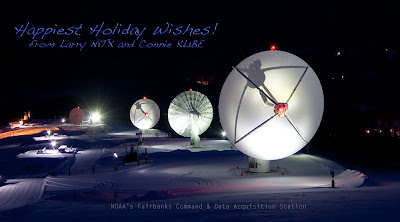 Between October and March, my XYL Connie KL1BE will often ask, "Is there a contest this weekend?"  My answer is usually yes, and she responds, "Of course."  The query is merely perfunctory, and after all these years of gaining momentum, KL2R occupies my off-time a lot.  Having recently moved from engineer to paper-pusher at the office, I find ham radio more rewarding these days.  I can still get my brain engaged and hands dirty solving technical and method problems.
The weeks in and around November, of course, are filled with Sweepstakes, CQWW, and a number of other on-air sporting events proving to be quite popular.  I had mixed feelings about entering solo in CQWW CW this year.  I am always excited to do a CW contest like this, but how would I fare over the 48 hours?  I had been up since 2 AM Friday.  Never mind, though.  I got a late start after helping KL1JP configure some new equipment and software for the KL7FWX special event.  Twenty was alive with JAs and UA0s, then it tanked quickly.  15m was slightly promising to Asia for a while. I tried 40 with only a little success.  I was soon exhausted and had to sleep, but not before I set an end-goal of 1000 Qs and/or 500k points.
I apparently missed a good 40m opening, but I started Saturday right with some good runs on 15 and 20, plus a few contacts on 10m.  I trudged on most of the day and night looking for good multipliers with the grayline.  The Middle East opened nicely on 20m late in the evening, and I worked Saudi Arabia, Oman, and Qatar.  Europe was steady later on.  Around midnight into early Sunday morning, 40m was just a blast.  I have never seen so many strong signals in 13 years working from Alaska.  I could snag many East Coast stations with one call, a rarity.  I worked into Japan, the US, and Europe simultaneously.  I had one anomalous contact on 15m with an S5 in the middle of the night on 15.  Weird. 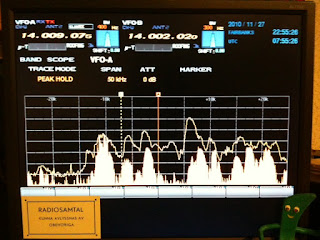 At 0330 Sunday, I had to sleep again.  I had planned a three-hour nap, but I failed to set the alarm clock correctly.  I didn't get started again for nearly six hours.  I missed catching the early run of US on 20 and some more action 15.  I pressed on with S&P after only a handful of weak runs.  I found I could keep a rate between 45 and 60 per hour this way.  I had a 240/hour run the day before. along with several periods of 180.  In the end, I made only 3/4 toward my goal.  But with 761 contacts in the log and several new countries, I'm pleased with the results.  I worked ZL8X on five bands, a real highlight.  Africa, the UK, and Spain could have been better represented, but I think this time the path to that general direction seemed lacking.  Check out the Google Earth plots at the akradio.net website.  It was Worldwide fun, though! 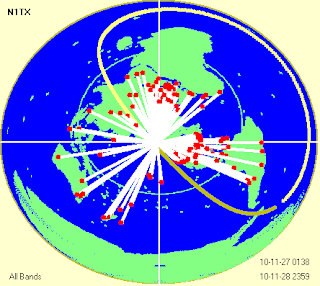