Gee, That Was a Lot of Fun!

If anyone had told me a week ago I could have this much fun running QRP from Alaska, I'd have said they were nuts.  I started the ARRL 10 meter contest at 5 watts just to test the waters, thinking I would soon grow frustrated and go with a LP entry.

Encouraged by the initial results, I stuck it out at QRP.  NL7YL's CW QRP AK record has stood since 1991, and I crushed it.  Another KL QRP might beat me this year, but the basic score was very gratifying. I could work just about everyone I could hear.  I even had some brief runs.  Conditions were far from spectacular, especially lacking EU.

Laboring under some disadvantage with tri-banders no longer horizontal after a month of back-to-back ice and wind storms, it's good to know the station still has some competitive standing.  The QSO count exceeds my lifetime QRP achievement by two orders of magnitude.  I can't complain about that.

A New Slant on Radio

The weather has been wild for the past month or so.  Nov 13-14 brought freezing rain at +15F followed by heavy snow, more freezing rain, and then wind.  It was fierce, frightening wind, which toppled huge spruce trees, leaving thousands of people in the area without power for days.  KL2R didn't have juice for nearly five days.  As the temperatures plummeted to 0F and below, it became a full-time job just to keep warm.

Most of the antennas survived.  The only true casualty was the 80m delta loop.  The tri-banders at 55 and 75 feet were tilted 45+ degrees, but they still work.  In fact, a subsequent wind storm several days ago pushed the higher one aimed at Europe to vertical polarization.  Repairs will have to wait until warmer weather. Nevertheless, their survival of estimated 70 mph winds and ice with no damage is a real testament to the Force12 engineering behind the C3s.

I had a feeling the ravens flying past were mocking me. 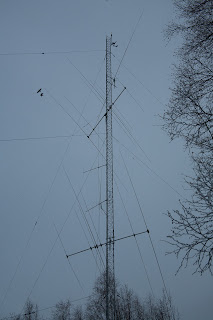