The Joys of Old and New

KL1JP, WL7BDO, KL6C, and KL1AZ joined N1TX for ARRL DX Phone last weekend.  After the great conditions in the CW portion of the contest, hopes were very high.  In fact, operations started with a bang with some very satisfying rates:

On Friday evening, we even caught some traction on 40m by running split, transmitting from about 7080 kHz and listening above 7200.  We were no match for fickle Mother Nature, though.  Rates soon vaporized, and even S&P became a challenge.  The Kp and aurora numbers were both headed up.  The final 24 hours were abysmal.

Nevertheless, the team refused to cave and spirits remained high throughout the ups and downs of propagation. The 23.5 hours of "operating time" shown below does not reflect an additional 20 hours of tuning dead air.  Naturally, after hours of the doldrums on Sunday, we got a good run going 10 minutes before the finish to push us over the QSO count achieved in 2007.

As it happened, KL1AZ's 12-year-old granddaughter Dale proved to be an incredible contester-in-the-making.  She quickly learned the ropes of running and S&P with Win-Test.  Her memory is like a steel trap, and she has that edgy, assertive personality required for effective contesting.

Once she was basically comfortable with the exchange, we worked a system where one of us would type and key the transmitter while she talked.  It worked well.  Fred NA2U later commented by email, "I was very surprised to be called by a young girl with that callsign.  She did great on our 15m Q.  Best of luck to Dale!  Everyone knows we need new, young blood in the hobby."  In the photo below, Carl WL7BDO serves as control op while she scores another QSO with a big smile. 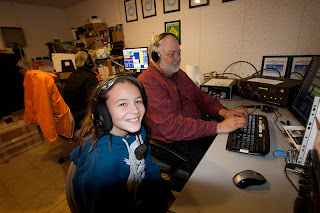 Dale may end up being better suited for CW and RTTY contests, though, because her high-energy requires a lot of stoking.  Her eyes and hands were constantly on the prowl for power snacks.  A mouth full of sunflower seeds is incompatible with a phone contest.  Dale plans to take her license exam in April.  Look for more of her on-the-air adventures.
Posted by KL2R at 16:38 1 comment: