Conditions seemed, overall, quite decent for KL7 stations.  KL1JP reported incredible propagation using QRP on 80 and 40 meters Friday night.  No 10 meters was obvious in Fairbanks, but 15m proved strong from US/VE and JA.  N1TX took KL2R through the paces solo-band on 20m in low-power unassisted.  The EU C3 tribander proved its worth there.

Dan KL1JP and Elaine N6PU kicked off Saturday on 10, and shortly thereafter moved to 15 meters to good effect.  Elaine was new to Win-Test, and between that and getting used to the complicated Sweeps exchange, she had a steep learning curve.  However, she soon became expert.  The operators discovered that the cure for calling CQ and getting dead air in return was to have one of them remove their headsets.

Dan took advantage of the relative heat wave of Saturday afternoon -- it had warmed to -15F -- to try installing a new 160m vertical (rev 2.0), which unfortunately wouldn't tune up.  The MFJ antenna analyzer was cranky in the cold, too.  Dang!

At 1800 local, their shifts were done, so I pressed on 40m for a short while before getting a headache.  After supper, I napped a couple of hours and returned to the airwaves to ply 80/40 to little effect.  I mean, something like 10 QSOs in six hours?  C'MON!

Elaine returned early Sunday morning as 20m was perking up.  Guest operator Bob WL7GK arrived around 0900 local.  He was new to contesting, and Elaine patiently showed him the ropes while I fought a Windoze problem on a rebuilt laptop.  She gave him a good hour tutoring before having to leave again.  Bob caught his stride with S&P, picking up several badly needed sections on 20 and 15m.

After lunch I finally elbowed my way on to 20m to try to catch a little running.  After a couple of CQs, and operator called me and told me I was QRMing some net and asked me to move a few kHz.  I agreed, but only after I guilted him into giving me an exchange. :-) I also worked W2RCA, a special event station for the Radio Club of America, which was a bonus.

Just after 1600 local I broke 300 QSOs and pulled the plug, completely exhausted but quite pleased with everyone's teamwork.

We had no equipment problems, save for the 160m antenna situation.  Dan and I are determined to solve the Top Band QSO gap sooner rather than later.

Notice: We have finally signed up with GlobalQSL for confirmation delivery via the bureaus.  Service of everyone's QSL request should be much more responsive. 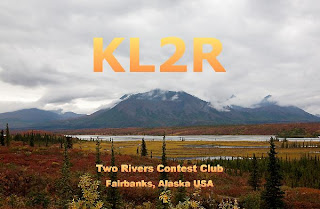 I promise not to whine about how lousy the low bands were for us and will focus on the up sides observed here at KL2R.  Elaine N6PU soon developed a knack for keeping 15 meters open until late in the day on Saturday after some brief 10m fun with KL1JP.  N1TX manned the late shift on 40 and 80, and it might as well have a head-banging contest.  Elaine had a late-night work call-out and arrived about 1600Z.  She soon mounted up for some 20m action.  When guest operator Bob WL7GK arrived, she took him under her wing for the basics of operating this contest with Win-Test.  After a little more side-saddle time with Larry, Bob soon found a technique that suited him: S&P.  He netted several badly-needed sections, and I could see a big grin develop from this initial panicked look.

In short, I think we al learned something, both about each other as well as various technologies in the KL2R shack.  It's a training ground, first and foremost.
Posted by KL2R at 20:39 No comments:

The contest was off to a promising start with a strong opening on 15m, but eventually we moved to 20m and found it was hard to gain traction. Best 40m QSO count ever using the new dipole at 100 feet. Sunday proved rough as the aurora picked up (see purple curve in the chart below), and those east coast multipliers could not hear us. 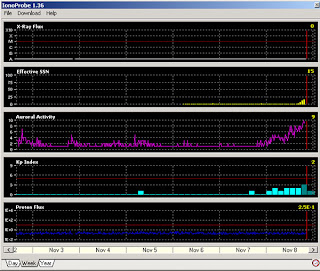