Rich KL7RA pulled off a miracle and herded Alaska cats again for the second and final week of W1AW/KL7 operations for the ARRL Centennial.  KL2R contributed about 9% of the 37k QSOs thanks to KL1JP, KL3UI, KL6C, WL7BDO, and N1TX.  Overall it was a greater count than June operations, but KL2R's log was lighter this time around.  Fewer operating hours were possible from this location.


Gary NL7Y generously loaned the use of his FTDX5000MP, which proved a very solid performer in receive.  It did duty a lot on CW and RTTY without flinching.  The audio is easy on your ears, and the dual-receive is extremely useful for a variety of conditions.
Posted by KL2R at 11:49 No comments:

A Miss at CQWW RTTY

Preparations for W1AW/KL7 (starting Oct 1) meant we had to give a pass on the WPX RTTY contest in 2014.  It was a bit painful to miss out.  KL2R holds Alaska records for M/S HP, M/2, and SOAB LP Assisted in CQWW RTTY.  We -- KL1JP, KL3UI, and N1TX -- wondered briefly if any of those records would fall as we took advantage of fleeting decent weather to do antenna work. C'est la guerre.  In these parts, antenna season is decidedly compressed even in the best of times.  The summer of 2014 broke many rainfall records, so any semblance of an outdoor project schedule soon washed away.

There we were, in the final days of reliably above-freezing temperatures, and there was no time to waste for antenna work.  A new 5-element 6m yagi is up, at least in its temporary location for testing. The DSEJX5-50 arrived about a month ago.  Terry W8ZN and his crew at Directive Systems are breathing new life into a company originally founded by Dave K1WHS.  The entire experience of ordering/paying to final assembly was smooth as silk.  And the new antenna, built according to the instructions, tuned right up without issue and performs as advertised, with a sweet VSWR for 50-52 MHz. 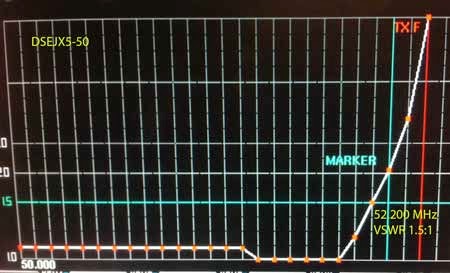 A little cleanup was in order, too.  The Hexx beam, which never really saw much action due to location, was partially disassembled and sent to its new home with Dan KL1JP.  It's a very good performer, but we never could find the right location for it at a decent height.  It definitely could not go on the tower.

Now the BIG project on our minds was a new phased vertical system for 40m.  Last summer we got the ground mount holes dug and cemented into place.  Dan made a command decision to make a herculean effort to get this project off the ground before another winter fell, and the rest of us followed.  DX Engineering and amazon.com delivered the parts in short order.  So we got busy measuring 2000 feet of wire into suitable segments, trimming, crimping, and heat-gunning.  I can highly recommend Ancor marine-grade ring terminals with heat shrink on the ends for superior mechanical integrity and reducing wire corrosion.

We hit a few snags.  Last year I had my fence guy put in three mounts with standard chain link fence corner posts  buried in cement about 3' into the ground.  It turns out these posts are 2-3/8" OD and too big to fit the DX Engineering clamps.  Rather than drill, grind, or otherwise make-to-fit, I ordered two sets of CommScope heavy duty pipe-to-pipe clamps (model BC-30-10) from Tessco while KL1JP picked up 2" steel pipe in town to clamp on to the fence posts.


A second snag was initially more troubling but resolved quickly.  We bought the Comtek 40VA vertical antennas, and upon first inspection, it appeared parts were missing.  The included instructions didn't quite reflect reality. When we opened the second box and found the same thing, it was a real puzzle.  After checking on line at the DXE web site, there is a Rev. A instruction manual, which was more aligned with reality, and assembly could proceed as normal.

Each 40m base is substantial. The antenna shows a very favorable VSWR across the band so far. It gets above 1.5:1 at the high end of the phone segment, and we often work split anyway.  Anything below 7100 is great.  The real proof of the design is with two antennas.  It's worth noting the paint on the steel pipe is slightly resistive (25 ohms or less), and some changes in VSWR could be expected by binding all the metals to the buried support. 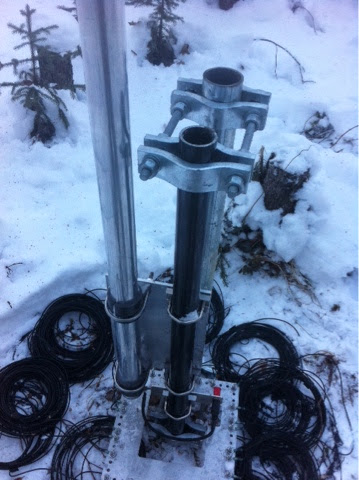