Last year, the KL2R crew were drafted into service for W1AW/KL7.  For this year's IARU event, however, we opted for a multi-single effort with W6HF, KL1WE, KL1JP, NL7WO, and N1TX operating.  It was a nice mix of interests and experience, and as a 24-hour contest, the pace was relatively leisurely for any one operator.
Band conditions were promising at the start with countless loud signals from Europe on 20 meters.  The 15m band never developed as hoped, but 40m blew the doors open with many loud stations from North America and the Pacific on the dipole at 100 feet.  For a while, we had a pipeline to Brazil.  ZL6HQ on 80 was a nice surprise, too.  QSO breakdown was a pretty even split between Europe and North America at about 40% each.  Africa was all but completely absent from our headphones.  Best DX goes to VQ9 and A71.  This DX Monitor map shows the distribution of all contacts: 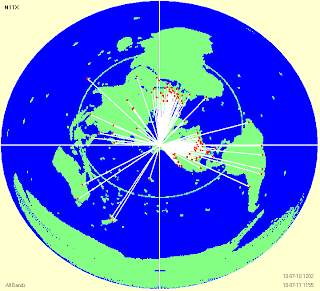 We had a special incentive to look for one particular Russian station.  Alaskan contester  and friend Corliss was invited to Moscow and operated R3/AL1G.  We worked her on both CW and SSB on 20 meters.  It turned out to be easier work her there than when she is at home, but it was still a big challenge!  Corliss seems to draw a big crowd whenever she's on the air.
Posted by KL2R at 15:16 No comments: