In mid-April I ticked off two items on my bucket list.  First, I had business meetings at the Institute for Telecommunication Sciences, the stuff of dreams for me as a lifelong radio geek.   The cavernous Building 1 at the Boulder, Colorado, complex has that true science lab feel with long hallways of cinder block and grey metal desks from a bygone era tucked in the countless offices.  Book shelves lined with Old School references and unique textbooks wound around the virtual boundaries of personal spaces.  That unique, musty aroma of old government buildings permeates the atmosphere. The place just smells like genius.  The fundamentals of radio science have been discovered and explored here for decades.  (Its organizational predecessor, the Radio Section of the National Bureau of Standards, was founded before World War I.) The trip was capped with a trip to Table Mountain, one of two radio-quiet areas in the US. Ancient antenna dishes stand out like monuments on the prairie.  It is a special place for an RF guy like myself. 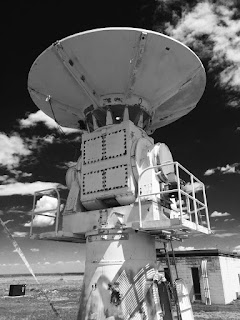 For many years I had pondered going to the Visalia DX Convention.  Last summer I determined to finally make an appearance.  I flew from Denver to Fresno (via Seattle and San Diego!), where Ken W6HF and Luci KL1WE met me.  We settled in a Tulare hotel a mere 20 minutes from the Visalia Convention Center.  One of the most remarkable things about ham radio is that faceless connections you make with people are almost indelible through the years.  Finally connecting with the people behind the signals was hugely satisfying, and of course seeing again a number of industry folks for the first time in the 25+ years since I worked at 73 Amateur Radio magazine was a real hoot.

At least among the contesters, the KL2R badge caught immediate attention.  They knew the call well. I was struck, however, by the number of people who came up to me and started the conversation with something like, "So do you really live in Alaska, or do you just have a KL call?"  To begin talking with a stranger like that implies a lot of cynicism.  I guess they've been duped in the past, excited to work a KL only to find soon after the operator lives in the Lower 48, but still...

In the end, I was sorry I had not attended before.  The friendships made, renewed, and cinched up enriched me more than I could have imagined.  If any of you are reading this blog, THANK YOU!  I hope to see you again next year.
Posted by KL2R at 08:30 No comments: