Running KL2R Solo With An Iron Pot On My Head 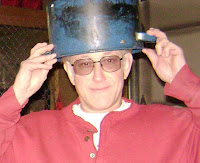 Larry was gone for the week and upon his return to , chose to operate at Rich Strand's station KL7RA in Kenai. Larry's absence from and the imminent CQWW SSB contest was enticement enough for me to operate KL2R solo and give those new antennas of his a methodical checkout. My strategy for the contest was to concentrate on acquiring multi's, EU stations and accumulate data on what antenna works the best and for what direction and time period. Little did I know the aurora would kick up into high gear, effectively throwing an iron pot on top of me and that the sun would throw off a nice X-Ray Class C burst adding to a growing list of challenges for my low power operation.

After initializing all the equipment and working out a few start-up bugs, I spent quite a bit of time simply listening…. switching between the Force 12 antennas – the NA C3 and the EU C3. I know that listening in a contest is verboten but heh… I’m testing here. The EU C3 had more noise than the NA C3 but the EU C3 was more sensitive to EU especially Russian and US west coast stations while the NA C3 was more sensitive to daylight JA’s and NA east coast locations. It quickly became obvious that working daylight JA’s off the back of the NA C3 worked better than the EU C3 direct. And, as I expected, on 20m is still easy during the daytime on the NA C3. I broke thru both large pileups on the first call. Attempting to work the B1/BY3 stations on the EU C3 didn’t bring any results and both calling stations were much muted.

Playing the grayline in the afternoon with the EU C3 got me several stations to the south of and the western coast of (Cape Verde D44AC) to boot. D44AC picked me up on the second call. Tonga (A31KK) came in around the same grayline time period and on the first call. Add to those, both ZM2M and VK4KW which were logged on 15m on the second call. The VK station said we had a big signal.

As I mentioned, during the contest, the aurora kicked up to 9+ and as you would bet, from Fairbanks, the only stations that could hear KL2R where those immediately inside Mother Nature’s iron pot, ie… the aurora cap. Realizing the low probability of contacting lower 48 stations, I altered strategy and attempted to maximize my multi points so I switched to the EU C3 and started calling CQ on both 20m and 15m. Stations in Sweden (SJ2W), Norway (JW7QIA) and Finland (OH8L) came booming back on the first or second call. Surprisingly, even a few in Spain (EB1WW) and (EC2DX) came right back.

Philosophical speaking, having a short lived but high aurora period puts us northern low power stations in good position to pick up EU mults while circumventing the competition. Stations outside the auroral bowl usually have difficulty in being heard by the stations inside the bowl. As long as the aurora is short-lived, it is quite comforting to hear the flutter and realize the competition just dropped out.

In previous contests, the NA C3 usually had difficulty working into JA country during their nighttime. However, the new EU C3 worked exceptionally well into the JA nights on 20m. I had little trouble picking up any existing 20m contacts that I could hear from both JA land and scattered locations within EU. Russian stations RG9A and RZ3AXX came back on the first call. Both reported we had a great signal.

The new 40m dipole was actually disappointing. I expected more EU stations. Generally speaking, I had better luck with the older 40m loop. For example, I was able to get UA0IT on the 40m loop but not on the 40m dipole. The 40m loop is also much quieter and if nothing else, represents an excellent receive antenna. However and surprisingly, the 40m dipole works FB into and the east coast. I got VE6FI, VE6SV and VE6AO and VA3YP () on the dipole – all on the first attempt. I now wonder if the 40m dipole is pointed correctly ? Time to dig out the compass and make some azimuth measurements.

Although I spent a lot of time testing, sometimes using one antenna to transmit while receiving on another, I still made 167 QSO’s with 30, 628 total points and was pleasantly surprised I did as well as I did with only 15 hours in the chair (had to work on Sunday).

N1TX diverted to Kenai on the way home from DC for a bit of radio action.  Great to have a mini-reunion of some of the old Fairbanks crew from KL7RA, plus some new blood added to the team.  And a good time was had by all. Listen to some 40m audio here. New Antennas on the Tower...At Last!

The planets aligned, weather moderated, friends and co-workers gathered for a good old-fashioned antenna party at KL2R yesterday. See the KL1JP video (28 MB) here. It's unbelievable how lucky we were. The Force 12 EF-140 40m dipole made it to 100 feet and is oriented to North America and Asia. This should help fill the gaps on 40m, as we go lacking for NA contacts in most contests on this band. The second Force 12 C3 oriented towards Europe is now installed at the 85-foot level and produces superior results. Check out the comparison I did today:

I don't have enough thanks to offer: KL1RL, KL1JP, N6PU, and my two work colleagues Marc Meindl and Lance Seman. 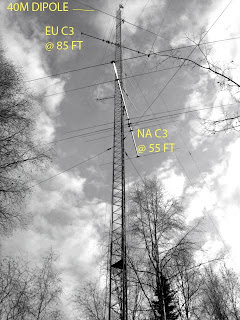