The Alaska contester community lost another great one last week.  Gary AL9A passed away suddenly while on vacation in Florida.  AL9A was a true beacon, often working multiple contests each weekend.  According to Carl WL7BDO, in 2015 alone Gary submitted 95 reports to 3830scores.com!  He most recently helped with the KL7RST special event.  He mentored a number of us, highly skilled in all modes, and particularly knowledgable about Writelog.

He was a kind, generous man and dedicated to his family.  He was so proud of his grandchildren and rarely failed to mention them in his correspondence.  We send deepest condolences to his clan.

Corliss AL1G put together a video of Gary operating in W1AW/KL7 as part of the ARRL Centennial celebration a couple of years ago:
https://vimeo.com/159658528/73daa94f67

The run up to ARRL DX SSB this year was an exciting one.  Compared to 2014, KL2R was largely silent in the multi-op categories for contests in 2015.  We did a multi-op in ARRL DX CW during 2015, but it was a marginal effort.  A number of factors contributed, chief among them broken and failing equipment.  Last fall N1TX resolved to get the station back to multi-2 capability.  A new PC for the main position brought the shack to life again.  The Shuttle XPC with a 4 GHz i7 CPU, 16 GB RAM, and solid-state drive has no problem keeping up with the multitude of tasks now.  It runs Windows 10.  Also, the Alpha 89 amplifier, long idle since it became deaf during a brown-out, went off to N4UQ for repair and was returned in perfect working order in February.

KL7SB and WL7F joined N1TX in the shack for ARRL DX CW.  It was a good shakedown.  We were able to get the "B" position PC going, but it had suffered the same boot problems and unreliability issues for quite some time despite repeated repair attempts.  After that contest, it failed hard.  With SSB looming within days and more interest in using a second radio to look for multipliers, KL1JP stepped in and donated another zippy PC, which was quickly configured and ready for action.

We have pretty much abandoned Win-Test in favor of N1MM Logger+ over the past year.  The latter is very stable and functional now, while WT support languishes and the program seems to be at a dead end. However, I had choice words for N1MM the night before SSB.  After an upgrade to the latest version, a cascade of runtime errors proved problematic.  They persisted even after a clean re-installation.  In the end, I had to rename the old database files, re-install the logger, upgrade it, and then move the old files into the new directory.  Heart attack narrowly averted.

Finally, KL2R was ready to go a mere few hours before contest start.  It started with a bang on 15 and 20, and just after sunset 40m gained some serious traction by running split.  KL stations can run phone between 7075 and 7100 kHz.  The FTdx5000MP dual-receive made it so easy to listen for Canadians on our transmit frequency as well as for US hams in the high part of the band.  One US ham commented how he'd never had to run such a wide split, which was about 200 kHz.  The bottom line is it works for us.  We can hear you, and you can hear us.

Sadly, Elaine KL6C was ill and missed the event, but the rest of the gang toughed out up-and-down conditions to score an all-time best for KL2R.  Many thanks to KL1BE for being a fantastic hostess again after several years of being out of the game.  Good to have you back. 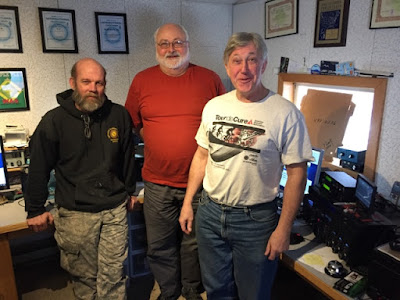 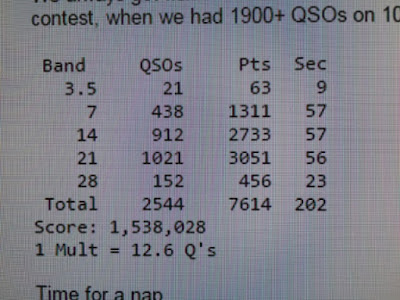 NAQP RTTY proved to be interesting.  I started off solo, and then Dan KL1JP stopped by to make it more fun as a multi-op contest (although we only used one radio).  Ten meters was a complete bust, and for some reason 15m never opened the way it usually does.  It's odd to see twice as many QSOs on 40 as on 15.  Twenty turned out to be the band we focused upon, mostly running, and not enough S&P time on the other bands for some better multiplier counts.

Many Canadian provinces were lacking, but VY0ERC called all the way from Ellesmere Island for a nice surprise.  Also, Andy VE9DX was able to reach out to us on 20 and 40m.  He is running 50 watts on  RTTY.  It is always a pleasure to work him!  Europeans and JAs called mightily at times, which is always very frustrating when trying to eek out a few new sections and states in a pileup

The boys at WL7CXP, about 40 miles west of KL2R, made a great effort and beat us handily with more multipliers on 15 and several on 80.  Here's what WL7F had to say about it, echoing several sentiments Dan and I had:


Well another RTTY Multi contest using the Skinny Dick’s club call WL7CXP.  This time we had Wes (WL7F), Carl (WL7BDO), and Paul (KL4ET) in the shack working the contest.  We started the contest out on 20M with KE1DS the fist contact from WA and ended the contest with W4MPB on 40M.

15M did not seem to open all day long really and did not hear a single signal on 10M throughout the day. This contest it seemed 20M was the go to band  for contacts which is a slight change from previous ones where 15M was the go-to band. The pace was a bit slower also which leads to good training time and time to hone skills on other aspects of operating. 40M was a good band for getting more multipliers and usually it is not as good so the solar cycle is definitely shifting. A few 80M stations from NVand CA made the log.

Paul worked VY0ERC, a weather station up in NU Canada, and Carl hauled in Japan even though someone came on the frequency and sent No JA. People really need to read rules and understand them. Guantanamo Bay was also on, but the pileup was too big. They were heard on 20 and 40 meters here.

Some of the statistics from WL7CXP:

Steve KL7SB and Wes WL7F joined me (N1TX) to form a pretty potent multi-single team at KL2R. Band conditions were really good, especially considering how iffy things were in the weeks and days prior.  In fact, it's safe to say propagation was so good at times the team's capacity to log was nearly saturated.  A big surprise was the solid-rate openings on 40m. The phased verticals worked stupendously.  The final claimed score bested a 2014 SO effort (N1TX) by about 350 QSOs and 100k points.

One of several highlights was working Phil AK7DD (ex-KL8DX), who now resides in Oregon. Check out his QRP activity (with an indoor antenna) here. He works us at around 5:30 into the video.