Just two days ago a number of hams and many others bid farewell to Bob Kreiser obituary. WL7GK was the raspy voice of Interior Alaska. Bob could be found as a regular on the Alaska HF nets and the repeaters. He loved to drive and motored with ham radio extensively, once even calling for emergency services to a bad wreck on an extremely remote part of the Alaska Highway. Bob could, and often did, break anything electronic. Still, his disasters brought learning experiences for all involved. Friendships were cinched.

Bob was not a contester, but he encouraged KL2R's evolution and had a few chances to operate from here. His own city location was plagued with noise. Bob was always among the first to volunteer for public service events and emergencies. He regularly pulled the overnight shift for Skywarn Recognition Day from KL7FWX, and he was a force behind several recent Field Day efforts under the KL7KC banner. He hated CW. His final gift to me was a Vibroplex Deluxe singler-lever paddle ca. 1975. In pieces.

WL7GK was a complex character. He was gruff. And loud. And very welcoming to honest, good-intentioned folk. His love of ham radio never wavered. I watched him come to terms with the end of his radio days. My heart broke. He did not linger long after. I can say he made the most of his time on earth in the 20 years I knew him. Godspeed, Senior Chief, and 73!

Off With a Bang

As promised, KL2R is starting 2018 with great gusto. Several contests have helped the count, but so has the International Grid Chase and a quest for Worked All States on 80 meters, which will also give us 5BWAS. That means we're reasonably active shooting grey line to DX in the morning and evening. Europe, JA, VK, and North/South America are proving to be very workable on FT-8, when openings can be very brief (minutes), but long enough for the new mode. As of this date, we have 40 LoTW QSLs on 80 WAS, and 21 DXCC. A highlight was working Francesco IK0XBX after trying for about three weeks.

This brings me to WPX RTTY last weekend, which was a big blast. Saturday was busy in the shack. Dan KL1JP stopped by late morning and proceeded to spend several hours running on 20 meters, picking up on an early opening that really didn't abate until mid-afternoon. At that time John AL7ID, Paul KL4ET, and Pete KL4IT arrived for a demonstration and tutorial. It was a good time to give the latter two an intro to the shack, as we switched to 40 and 80 meters and the rates slowed down. Pete is a newbie to contesting, but Paul had some experience with WL7F/KL4SD SK running low power. In the end, 900 QSOs and 907k points was more than double the previous best from KL2R.

I have to say that the past year has been nothing to shout about, at least as far as signals from KL2R have been concerned. Re-cabling in the shack and building a solid SO2R with new hardware from Microham basically came to a screeching halt. Contest opportunities and team members dried up, life basically getting in the way of a hobby.

The results are clear from log statistics from 2017 thanks to Clublog.

It is the lowest QSO count in a decade. The only year lower was 2006. We only formed the Two Rivers Contest Club in the fall of that year! So we go down in 2017 as not a failure but rather a station in transition. The to-do list is substantial, but so is the commitment to get it done in 2018.
Posted by KL2R at 17:53 2 comments:

Just before Thanksgiving, Wes Jennings WL7F, age 52, was killed when his snow machine was struck by an SUV near his home on the Parks Highway about 25 miles west of Fairbanks. The contest community has lost a good one. Wes could be a royal PITA, but I admired his energy and tenacity. He was brilliant and quickly leveraged his prime RF location into a top contest spot. Off grid. Low power. He took many risks, from free-climbing his tower in the middle of winter to the accident that killed him. He was a wild man, and I shall miss him immensely.
http://www.blanchardfamilyfuneralhome.com/notices/Wesley-Jennings

Naturally, FD propagation conditions were not very good, but that didn't stop an intrepid dozen from setting up and giving it ago under the KL2R banner. (KL7CDA was the GOTA station.) We picked a new venue at the Pleasant Valley Community Center, which is just about 7 miles east of the club station. Many thanks to John AL7ID for arranging to have the building during the weekend. Although a tri-bander was erected, only 20m proved workable. Dale KL7R rocked satellites handing out AK for a lucky few. The 6m setup really didn't prove helpful, but it wasn't for lack of trying.  Many locals are on 6m FM now. 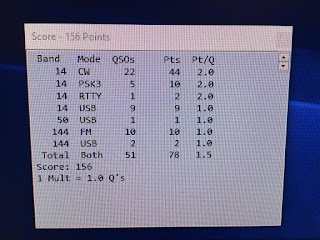 The tower is approximately 100 feet from the shack, and for years the cabling was only half-buried and subject to breakage. We also host the local wireless ISP equipment on the tower.  A snowplow snagged the internet cable and a coax in January. Laying new cable in thigh-deep snow at 30 below is not a great thing to be doing. A plan was thus hatched with the ISP owner to properly trench between the tower and shack just after Field Day. He has some dandy toys, not the least of which is a Bobcat skidsteer with proper attachments.  It was a 14-hour day, but conduit and spare underground cables were the result. 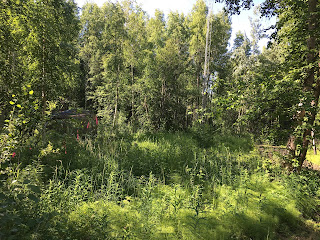 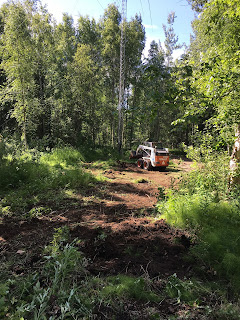 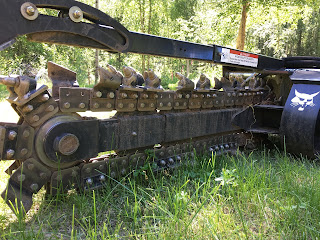 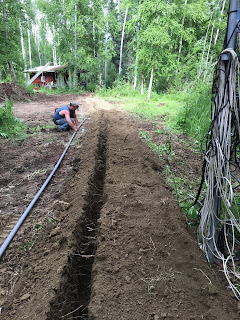 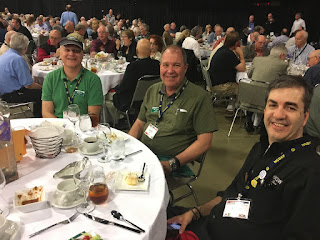 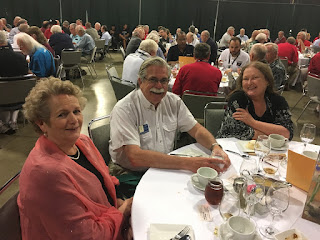