Hello there! This is a subject that a lot of the contesters have very strong feelings about. This is not an article to bash or even to look down on those that run legal-limit power, but rather to show how one can be successful running 100 watts.

To be successful at running contests at lower power one must understand some basics. First, you are not normally gonna break into that pileup and work that rare station the first time calling, even if the station is S9. Another thing is seeing as how you are not running power, ya need to make sure the antenna system is the best you can possibly put up, create, or even buy. You can be successful running just wires, as I have done in past, but ya have to make sure they are high enough to give you good take off angles, and the VSWR is as low as possible without a tuner in line. You want every watt going to that antenna.

Better antennas have a double benefit.  They are better on receive as well as transmit, and ya can't work ‘em if ya can't hear 'em.

Transmitter/Receiver/Transceiver is basically up to your preferences given your budget and operating style. A good 300 Hz filter is invaluable for CW work as well as RTTY, and a good sideband filter will help you. A bandscope on the radio will be another feature that is very helpful. A voice keyer another feature that is nice to have. If you have not noticed I have not said these things are needed with the radio but are helpful.  The whole idea is to get on the air and operate, and nice-to-haves are not required!!!

Now the most important thing is glue. Ya say glue? Yes, glue, because ya need to stay on the air even when the bands are slowing down or ya get a bit frustrated (yes, I have been guilty of this). You can't work a station if you are not there to work them, nor are you gonna get that rare multiplier if they all of a sudden appear on the band if you are not there. If you are doing a single band then know when that band dies and know when it might come open again. Take the break during that time and show up before it might come open again as it might surprise you that it opens before. So yes butt glue is exactly what is needed.

Find a local ham or a friend to compete against it will give you even more incentive to stay there and work the bands. After all ya don't want them to really stomp your butt if they do by chance ... strange fluke ..... wild possibility beat you. Set goals high and if ya meet them then set even higher goals during it. Learn to contest in all modes you will find that some will be a mode that works well from your location and that you truly enjoy working.

Now some tips I have learned and work for me during a contest. You have to be heard to be worked. Hams that normally don't get involved because of all the fast code actually will when they hear the slower CW. If you are going to be calling CQ ("run"), find a spot on the band normally up high that is relatively clear. If you are doing CW, don't be worried about doing slow code, since others will come and work you.  Something else that has helped me is opening the filter up and seeing if someone is calling off frequency.

Make sure you pay attention to rates (QSOs per hour or points per hour). When you drop below a certain rate during a run, go into search and pounce.  Search and pounce is very beneficial.  During search and pounce, you tune the band, hear a callsign, and toss your call out to work them.  If you call a couple of times and get no response, remember or write down the frequency and come back later. Another option is to just go up and down the band populating the band map in the logging software. The newer software does this for you with a few keystrokes.  The problem here is they might have moved on by the time you listen for them later.

S&P does two things. First, it shows you what the band is looking like, and it helps you decide if it is even worth staying on or moving to another band. By running up and down the band and calling, successful contacts will show you where your signal is directed.

These are just a few pieces to the puzzle, and if you would like to hear a few more, just ask. If I actually get some response, I will go over some of them. Something to remember is this: Just because someone says ya can't or it don't work, try it. You might be a bit surprised that it does work for you. I use to get told that contesting as a novice in the novice bands would not work. Guess what? It does work, and at 5 wpm, you will get contacts.  They won't be the quantity you will get later, but it will keep you busy and competing.
Thanks Wes WL7F
Posted by KL2R at 20:12 3 comments: Links to this post


We Alaskans appear to whine about extremely fickle propagation in virtually every contest.  "I had no idea" is the usual response when a guest op from mid-latitudes completes an hour or a weekend at the operating console under the aurora. They almost invariably come up here thinking they can teach us "bush people" rubes a thing or two about contesting. The visitors go back home shaking their heads. Ham radio is hard in the Far North.

This year's RU played out with some decent results, all things considered.  With radio blackouts, geomagnetic storms, and green lights overhead, this game proved to be more tactical than anything else.  That is, if a band or operating technique started to gain traction, Mother Nature soon concocted another obstacle to force a change.  Just to survive the weekend in the chair of frustration was a major accomplishment.  That said, there were a handful of good (and sometimes strange), brief openings across HF.  At least I didn't get skunked on any band.

Special mention goes to N7XCZ, who provided a little insight into his excitement about Star Wars. Thanks for the chuckle! 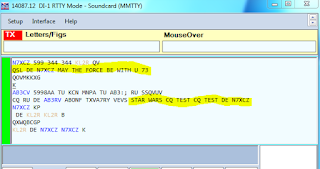