Yeah, well, THAT sucked. 98 QSOs in six hours of operating. My objective was 100. 40m never really opened. I was happy to make a few Q's on 15m. The rest were, of course, on 20m. The Kp and aurora were giving KL2R fits. On the DMU-2000, I could watch the signals peak and dip in a rhythm almost sea-sickness-inducing. Bang, bang: make four or five Q's in a spurt, then nothing for 15 minutes. Typical for Fairbanks.

I can understand why all the real contesters beat feet south as soon as they could.
Posted by KL2R at 19:21 2 comments:

My earliest memory of TV is Walter Cronkite signing off. That magnificent, confident, reassuring voice was something to which my whole family looked forward weeknights. I was hooked on evening news as a tyke. He has been much on my mind lately, as we remember two generations have passed since man first walked on the moon.

Although licensed only as a novice, I think KB2GSD was a contester at heart. "I want to win," he once said. "I not only want to win. I want to be the best. I feel very badly if I can't be."

Good night, Walter. Thank you for being the very best.
Posted by KL2R at 17:25 No comments:

I turned on the Wayback machine and found myself thinking about Field Day a few weeks ago.

Last year's participants, Ken W6HF and Luci KL1WE, couldn't visit for Field Day, and co-founder Rod KL1Y is overseas. Nevertheless, Field Day 2009 at KL2R was a record-setter. We station operated Class 4E for a change of pace. Rain was minimal, and KL1JP's solar-battery cooler was put to good use with FT897 and FT857. The FT950 was primary for CW and digital modes. N6PU's Jupiter was in the #2 HF position. Dan attempted several satellite QSOs, but the passes were not favorable.

Justin KL1RL dusted off the ham-hat and lent a hand on setup and operation after months away from any radio. New member Elaine N6PU was first to arrive and last to leave, and she stirred up some good interest on PSK31 and the other modes. Her 5 kW generator came in handy in the middle of the night, too. New licensee Alex KL2TI camped in front of the microphone with some coaching and worked some SSB. Phil KL8DX, another new member, drove all the way up from Healy and earned the nickname "Manimal II" after six hours pounding brass with little introduction or orientation. He said of Field Day at KL2R, "My first chance at operating in a group setting was last weekend, and it makes me want to return and do it many more times. "

As a beginning contester, this was my first multi-station event and I liken my involvement in IARU as something akin to the awe I've felt standing at the edge of the Grand Canyon or watching Mt. Saint Helens explode. Considering my marginal skill level, I feel quite humbled in being "invited" to participate by Rich (KL7RA) and Larry (N1TX). I've always wondered what it would be like to watch a log tick by fast, resembling a slot-machine feed of callsigns as contacts were made. From Fairbanks, there are always a series of challenging band conditions that most times plague our best efforts and you just do not see log entries motor-boating along that fast - ever. Thankfully, band conditions, even from Fairbanks were better than normal, which I suspect added to the extraordinary tally of contacts, especially those on 10m and 15m over the course of the 24 hour event.

It was truly amazing to watch the WinTest gab window; stations being passed from one band and op to another, reports of changing band conditions and of course, the camaraderie, issued personal challenges and the humor that were often displayed. In my opinion, it was a most memorable team effort by all participants involved. Simply put, it was a lot of fun to be a part of this, not to mention the education and experience I received. There's a lot to learn by participating in contesting. Any contest will allow you to work with different radio modes and frequencies, try new equipment, have a look at a variety of antennas and get a better understanding of propagation and the effects of the sun upon propagation and locations.

I continue to be impressed with all of the pre-contest testing and last minute tweaking everyone did for IARU. Things like Larry sitting out in his shack at 1am (that's 3 hours pre-start) wiring together a 240v power cable so we can use Gary's (NL7Y) amplifier, Rich climbing the tower to replace a blown 40m relay in the middle of the event or the extraordinary IT effort by Wigi (AL7IF) to make the routers play together nicely amaze me in term of commitment. And, I am especially astonished that nothing did a big melt-down in the middle of the event. We've all dealt with radio and computer equipment over the years to know how unusual that single event is; namely that everything worked the way it was suppose to AND when it was suppose to. After all... to think there were, what, 10 radios interfaced to 10 software packages using 8 separate routers using a variety of internet providers. Whew...just think what might have happened had GCI inadvertently cut their fiber optics cable again?

There were a lot of personal "firsts" for me in this event. First time I saw logging that rapid, first time as a multi op, first time I used an amplifier (thanks Gary !) and of course first time I used the W1AW/KL7 callsign. I remember hearing more than a few "huh's ?" and "are you guys in Alaska ?" and "how much power are you guys running ?" returns on calls. I assume the amp was partly responsible for our delightful BIG BOOMING signal for a change. And then... there was the tenacity of the operators. Now I know first-hand what sort of effort it takes to rack up several million points.

This truly was an once-in-a-lifetime experience. Thanks again to Rich for his extraordinary courage in placing his head between the stock and the guillotine blade. Thankfully, no one had to let the blade loose. 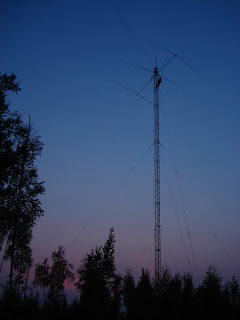 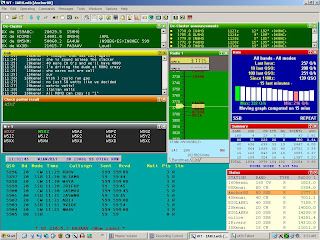 The king of multi-multi contesters in Alaska, Rich Strand KL7RA, proposed last year to operate as W1AW/KL7 in the IARU HF contest. Several stations signed up to activate the headquarters station, and the idea began to germinate.

Rich pulled a million strings, even up to the last minute, to make the knot that held this thing together. WOW! He is far too modest, but I think we all know without this extraordinary effort, W1AW/KL7 would have been a pipe dream.

The HC8N CW team stacked the decks from Rich's new Kenai station. The 3830 reflector is full of comments regarding how strong the signals were. Some good 10m contacts were in the offing, too. Those guys really know how to light up the ionosphere.

Wigi AL7IF gets a blue ribbon for his technical support getting the VPN and WinTest networking going well in advance so we could have a chance to wring things out. Without it, I have a feeling things could have gone very badly.

Corliss AL1G gets my gold star for sheer staying power and making the Voice of Willow a force to be reckoned with, especially towards the end when new stations were not that easy to find. She did a tremendous job keeping alive the memory of Frank KL7FH SK.

The odds and ends I contended with at KL2R to get ready were numerous but all relatively minor. Repairs from Field Day, re-cabling, labeling, running 240 VAC for the amp, etc. I dotted the last i and crossed the final t with just under 3 hours left until the start.

Dan KL1JP started the generator at 1150Z and toughed it out for half the contest until work demands drew him away. Thankfully,Gary NL7Y came to the rescue. Both these guys deserve a round of applause for dogged perseverance in less-than-ideal conditions. But we're used to that sort of tenacity, which is what it takes in Fairbanks to compete when the Kp and aurora go high. Lesser ops would have gone to bed or gone fishing.

The technology -- WinTest in particular -- was rock-solid. IARU gave us a chance to exercise some of the multi-multi tools in the software suite. After this, M2 operation at KL2R will be a piece of cake. Partnering was fun to do. Gab kept us awake and entertained, not to mention proved an invaluable coordnation tool. (I didn't receive one phone call.)

I had a huge sense of relief when I powered off the generator at 1201Z Sunday. I had slept barely 3 hours in the previous 48, and as Gary said, I was slowly bleeding. But I went to Snoozeville feeling a great sense of accomplishment, tremendous pride in everyone's teamwork, and above all, real honor in having been invited to participate in such a special event.
Posted by KL2R at 20:22 3 comments:

Yeah, I know, the web site just isn't keeping pace with all the shenanigans going on of late at the Two Rivers Contest Club. So, belatedly, we decided to try to keep up via blogging.