The phone portion of ARRL Sweepstakes using low power from interior Alaska often generates a combination of great excitement intertwined with abject frustration.  Each year, we hope against all past evidence, that this will be the weekend for a clean sweep, working all 80 ARRL and RAC sections.  The strategy is tricky to execute with very limited openings to some of the New England states and eastern Canadian provinces.  Then the stars must align to actually find the odd station in, say, Newfoundland or Rhode Island.  Even if these factors are favorable, chances are their antennas are not pointed to Alaska.  And to overcome the drone of Stateside stations pummeling the rare ones' receivers with desperate calls, our measly 100 watts has to be timed exactly right.  Odds are overwhelmingly against us.  We persevere, though.  The magic of Sweepstakes is just too powerful to resist. 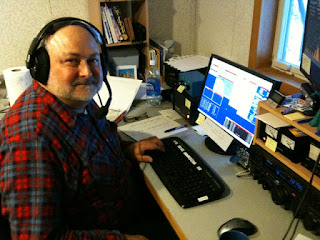 Carl WL7BDO (above), Elaine KL6C, and Dan KL1JP were undaunted.  I turned over the KL2R reigns to them for the SSB Sweepstakes weekend and stood by to bring hot coffee, liaise with KL1BE in the kitchen, and to offer some technical advice as needed.  I was soooo impressed by their teamwork and perseverance.  On top of it all, the weather was bad with heavy, wet snow falling and icy road conditions.  Carl came all the way from Nenana, about a 70-mile drive, only to get stuck in the driveway a few minutes before the start.  Fifteen minutes later, though, we had him parked at the mic on the way to collecting valuable contacts.  Elaine's 6-dB signal booster (her YL voice) drew in stations from all over North America.  Here she smiles having just snagged Iowa: 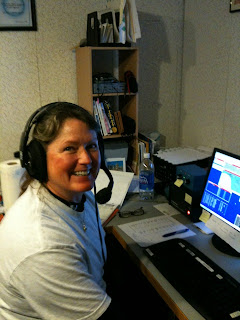 The method was mostly S&P, but a handful of brief runs boosted the rate and final score to best 2008 and 2009 results.  I discovered donuts were powerful motivators.  Coffee was the  lubricant of choice, and KL1BE's tasty meals provided the necessary calories to keep reaching for the elusive clean sweep against all probability.
The consensus is, as usual, we need an amplifier.  Santa, can you hear us through the pileup?
Posted by KL2R at 10:15 1 comment:

This being fall, we Interior Alaskans find a chill in the air, leaves long gone from the trees, and a few inches of snow on the ground.  October and November bring the fall CQWW and ARRL Sweepstakes contests wafting through the air with a tiny hint of better propagation, and the combination is potent.  Adrenaline starts to pump most weekends.
This is a slow weekend, contest-wise.  I got up early and knocked off a few OK and OM stations in their DX contest using a rough path over the pole on 20 meters.  I called CQ high in the band and had a lot of fun working QRP station N7LWF, who blew me a way with 1.5 watts thanks to grayline enhancement as the sun rose here.  When the European nighttime fell and signals faded, I tuned around after a hearty breakfast and found some DX activity (including the YJ0HA Vanuatu DXpedition) on 15 meters.

Except for a lot of past CW action on 30 meters, I'm a relative newcomer to the WARC bands, so I decided to move on up to 12m to see what the propagation may be like.  The station is limited on 17 and 12, because I have to use a tuner with the C3 tri-banders to punch out a signal.  Just before lunch, I dropped a CQ, and pretty soon I had a decent pileup.  Ten has been largely dead from KL for a long time, so this was downright exciting.  I seemed to work stations in regular increments of distance; i.e., W6/W7, Texas, and Florida, all at the same time with nothing in between.  Allen N5XZ/KL5DX came on frequency from his Texas QTH and convinced me to try 10m CW.  It was tough going, but the path was there enough to complete the exchange.  Afterward, I went back to 12m and tried SSB for a bit more fun.  Let me say that I'm impressed.  Another band has life in it when the usual haunts fail to get the heart pumping. 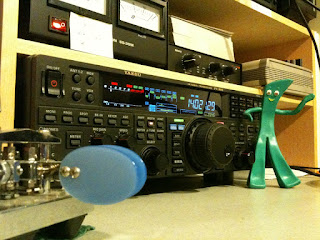 A box from Array Solutions perched on my desk one morning a few months ago.  I was excited.  KL2R had just taken delivery of a Mini Stack Match:

The Stack Match principle allows you to phase two, three, or more antennas while maintaining a constant 50 ohms.  A number of configuration options are available, including both-in-phase (BIP) and both-out-of-phase switching for ultimate stack flexibility.  Being on a tight budget, I opted to purchase a two-antenna Mini Stack Match (BIP only) and use 2x1 coaxial switches to switch it in and out of line.
Although I've had limited time to test it, its value became immediately obvious.  I had begun to notice the 20 and 15m paths to East Coast stations were, at times, slightly skewed to the north instead of the normal due east, thus making it difficult to work those stations using the usual NA C3 at 55 feet.  This was particularly true in the early morning and evening. The European C3 pointed north was somewhat better, but I found it frustrating to have to toggle back and forth between the tri-banders to get them to hear me.  When I hooked up the MiniStack Match, voila!  The combination of using both antennas in the stack saved time and trouble of switching, and I could work across the entire US and Canada much more easily.  Another advantage I have found is that I no longer miss those brief openings to EU and AF when I happen to be running US/VE stations on 20m.  It's the best money I have spent in a long while.
Posted by KL2R at 18:27 No comments: