Conditions on 10 meters in the latest ARRL contest were overall excellent from Alaska.  From the Fairbanks and Denali areas, KL1JP, KL6C, WL7BDO, and KL8DX reported spectacular results.  Although there were no true openings to Europe, A65BD did make a brief appearance at KL2R just after midnight on Sunday morning.  South of the Alaska Range, propagation was apparently excellent, too. JAs were plentiful when the eastern US died down.  A number of Asian and Pacific stations were loud but sporadic to appear.  Ten meters seemed to burst to life around 0830 local time and shut down quickly about eight hours later. Some UA9s and UN stations could be worked around 2100 local (0600 UTC).  During the final few hours on Sunday, the band became somewhat unstable, and signals came and went quickly.


Soapbox         : That was fun.  Too bad the band never opened to Europe.  Sunday night I heard A65BD at midnight  for about 2 minutes before he faded.  Dang.  A surprising number of dupes.  Hmmm...Thanks to all  who worked me, even if twice for good measure.  You made it a real pleasure.
Posted by KL2R at 18:18 No comments:

How Was Your Thanksgiving Weekend?

After a pleasant Thanksgiving day with friends and family in Fairbanks, N1TX flew on Friday to Kenai to join Rich KL7RA, Tree N6TR, and Wigi AL7IF for an all-out M2 assault on CQWW.  Forty eight hours, 8000+ QSOs, and 13M points later, the team basked in the feeling of a job well done, celebrated with margaritas, and ended the evening with -- wait for it -- a turkey dinner.  Great times!

Now THAT was a real hoot!  The boys at Array Solutions returned the ACOM 1010 with a new tube late Friday before Sweepstakes SSB started.  A quick check, and we were ready for an all-out multi-single shakedown of the station.  KL1JP loaned a brand new FT-950 to augment the primary station for multipliers.  It paid off, because we snagged a clean sweep a couple of hours before the end when a VE2 station called us.  We worked many difficult sections early, as the operators had some incentive.  They all received $1 rewards for snagging the tough ones.  (Thanks to Elaine KL6C for the photos.) 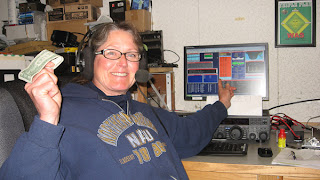 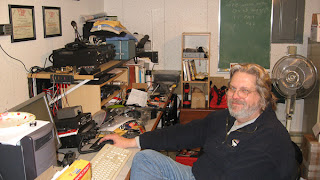 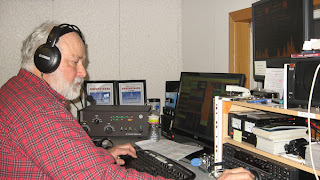 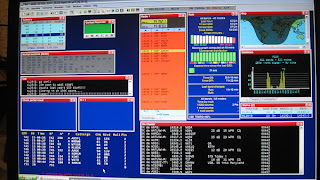 Hexx Beam Under the Aurora 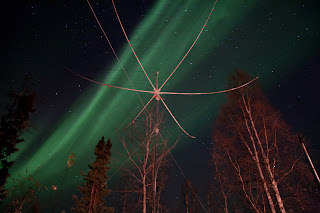 John Shadle W4PAH visited during Field Day, and he took some nice shots of the operation:

It's the Power, Man

In November, KL2R purchased an ACOM 1010 amplifier from Array Solutions.  I really enjoy doing business with AS, and the ACOM line has a good reputation.  The 1010 fit the bill, as in budget.  Array Solutions cut us a break on shipping to Alaska to offset the "free shipping" benefit to Lower 48 hams.  I could not have been happier.

The amp remained idle until WPX CW, which was planned as a test run for Field Day using high power and generators.  Neal W7USB loaned a Generac 7 kW generator with 240 VAC output more than sufficient to drive the ACOM 1010.  After some fiddling to get the T/R delays set well for the FT950 and Microkeyer II driving it, we were off to the races.  The shack was quite hot, 85F, as a result of an extraordinary heat wave over Memorial Day.  As the ambient temperature increased, the G2 LED began to flash with more frequency.  The manual says it is an indication of overdriving or a need to adjust the amplifier tuning.  Neither was the case, and the error persisted even with 20 watts drive from the Yaesu. Oddly enough, switching to standby from operate while G2 flashed would trip the amp into fault mode. A number of causes are under investigation.  This remains a mystery, and the problem repeated itself during Field Day.  I need to complete testing on stable, commercial mains.
Posted by KL2R at 17:23 2 comments:

Time marches relentlessly, and another year has come and gone since the phenomenal 2010 version of Field Day.  This year we ran 4E with an ACOM 2010 amp in place for part of it.  Publicity was simply stupendous thanks to Neal W7USB and his natural PR abilities.  Local radio stations and the News-Miner newspaper provided coverage, and nearly three dozen visitors came to check out the operation.

Breakup this year seems slow to proceed.  An abundance of snow as well as days and nights toggling between 35-40 and 10-20F means a constant cycle of slow thaw and re-freeze.  Antennas weigh on our minds, Dan and I.  KL1JP has already begun construction of a 160 vertical, and a new Hexx beam arrived in the mail.  Planning for Field Day has begun in earnest, too.
Until the ground thaws, a lot of preparation for summer is in order.  Gather parts, place orders, line up volunteers.  As the snow parts, a few blades of grass are beginning to green.  Still, the ground is solid as cement just below the surface.  It's a tease.
A new QSL design has just been shipped to Gennady UX5UO.  Fantastic work at a reasonable price. 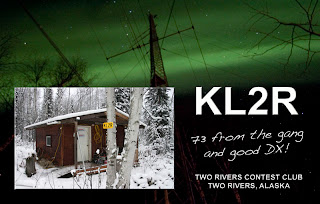 While I like to operate a fair amount on PSK31 during non-contest time, that mode simply is not robust enough to cope with the flutter and Doppler smearing on the trans-polar paths.  To be fair, the popularity of PSK31 and its performance on a light band make it a valuable asset in the mode arsenal.  However, phase-shift keying detection requires a relatively pristine and stable carrier.  Also, the lack of forward error correction in the data stream makes it completely vulnerable to corruption caused by the peculiarities of a turbulent ionosphere.
Various other weak signal modes on HF have captured my interest for a while, as you can see by reading earlier posts on playing with Olivia during a solar storm and impressive results on QRP via the Weak Signal Propagation Reporter Network.  Modes based on multi-tone frequency-shift keying are inherently better suited than PSK for rough skywave conditions.  Detection is easier, because the demodulator does not have to lock to an unsteady carrier.  Also, if the data stream carries some redundancy and/or error-detection or error-correction coding, the impact of a lost tone here and there due to selective fading can be minimized.
Over a decade ago, Joe Taylor K1JT began to develop some rather robust modes for weak signal communications at VHF to bring exotic propagation modes like moonbounce and meteorscatter more down to earth for hams unable to erect giant arrays and to run legal limit power amplifiers.  The project evolved into "Weak Signal Communicatons, by K1JT", or WSJT for short.  The protocols now in use include FSK441 for meteorscatter and JT65, which has proven very popular for V/UHF moonbounce and is increasingly used by weak-signal enthusiasts for HF skywave propagation.  JT65 has a number of sub-modes, but you will find JT65A in common use on the HF bands.  If you have a soundcard interface for your radio and can keep the PC clock fairly well synchronized, you have all the fixin's for a JT65A operation once you add some software.
Several weeks ago I downloaded the WSJT 9.0 package, which is available for Windows and Linux.  I must admit to have been a bit overwhelmed by reading through the user's guide, but eventually things started to make some sense.  Getting everything set up and ready to use takes some deliberation, and it helps to have an experienced Elmer to guide you through getting on JT65A.  (The Alaska-Yukon Weak Signal Group is a great resource for us northern hams.)  Those a bit impatient who just want to cut to the chase with a single mode can download JT65-HF written by Joe Large W6CQZ.  The software runs on Windows only.  The interface is  intuitive, and soon you can be pointing and clicking your way to DXCC.
Make no mistake.  JT65A is not a ragchewing mode.  Each transmission and decoding cycle takes about one minute, and messages are limited to 13 characters.  Nevertheless, it is very effective getting basic information exchanged across an otherwise-impossible channel, even more effective than CW when the signal-to-noise ratio dips to the -10 to -20 dB range.  Case in point:  Last night on 40M, I monitored an exchange between ZS (South Africa) and FR (Reunion Island) in the SW corner of the Indian Ocean.  I couldn't hear a thing, and I could barely make out the tones on the waterfall display.
JT65A is powerful stuff!  Many operators use 10-25W into simple wires or vertical antennas for worldwide contacts.  These are during conditions in which your grand pappy would have had sense enough to go fishing instead.
Posted by KL2R at 15:10 3 comments: